Available on all plans

This document provides information on how to successfully make the Calls plugin work on self-hosted deployments. It also outlines some of the most common deployment strategies with example diagrams.

Available only on Enterprise plans

For Mattermost self-hosted customers, the calls plugin is pre-packaged, installed, and enabled. Configuration to allow end-users to use it can be found in the System Console.

Depending on how the Mattermost server is running, there are several modes under which the Calls plugin can operate. 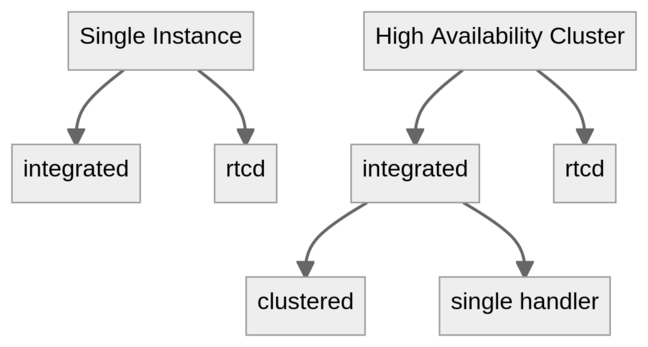 This is the default mode when first installing the plugin on a single Mattermost instance setup. The WebRTC service is integrated in the plugin itself and runs alongside the Mattermost server.

An external, dedicated and scalable WebRTC service (rtcd) is used to handle all calls media routing.

This is the default mode when running the plugin in a HA cluster. Every Mattermost node will run an instance of the plugin that includes a WebRTC service. Calls are distributed across all available nodes through the existing load-balancer: a call is hosted on the instance where the initiating websocket connection (first client to join) is made. A single call will be hosted on a single cluster node.

This is a fallback mode to only let one node in the cluster to host calls. While the plugin would still run on all nodes, all calls will be routed through the handler node. This mode must be enabled by running the instance with a special environment variable set (MM_CALLS_IS_HANDLER=true). 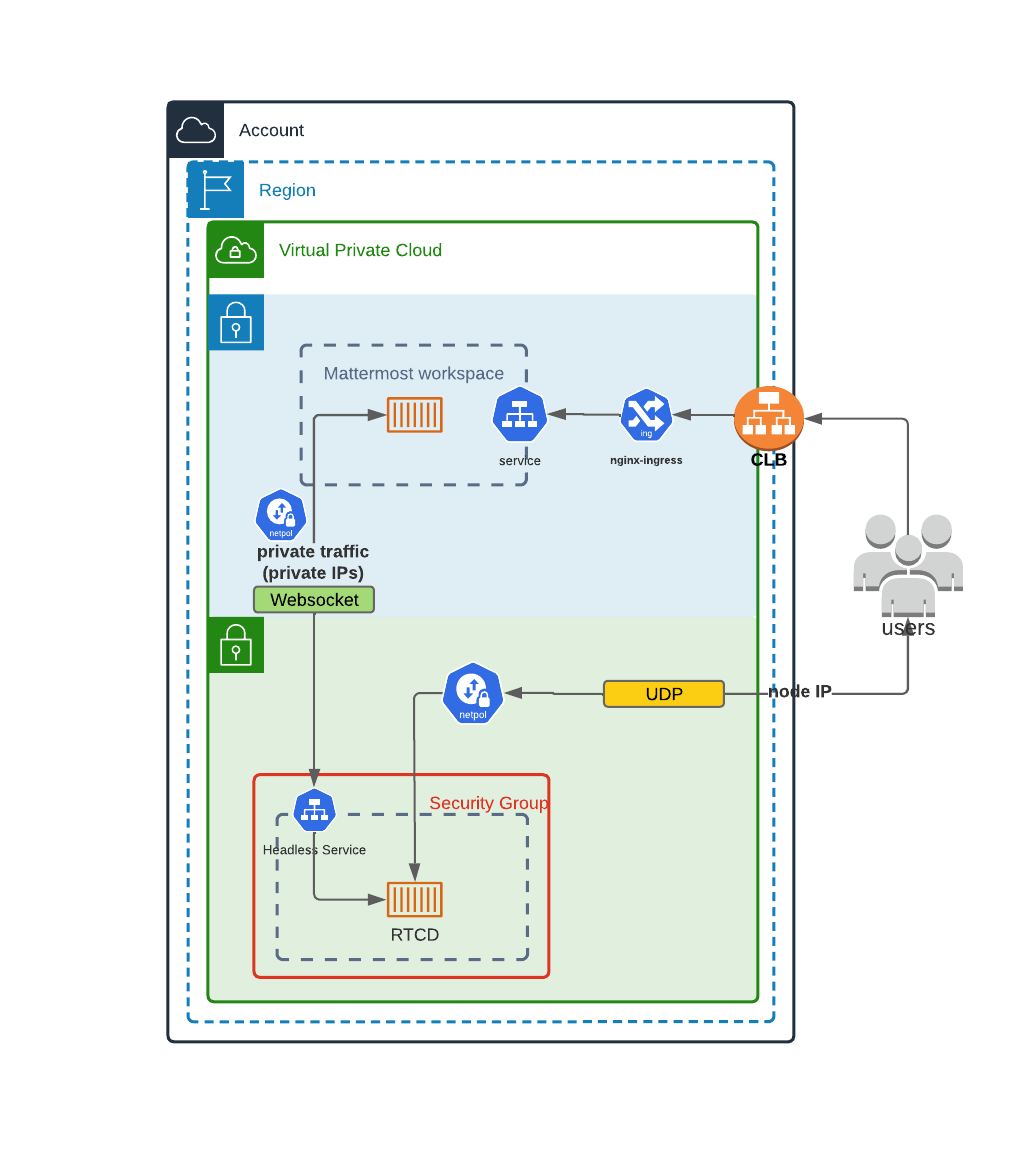 If Mattermost is not deployed in a Kubernetes cluster, and you want to use this deployment type, visit the Kubernetes operator guide.

rtcd is deployed with a Helm chart. To install this Helm chart run:

More info about the version and the chart itself, please check here. Regarding changing the parameters of the helm chart, please check and copy the default values from here.

An example with sample values:

rtcd will be deployed as DaemonSet, for that reason the sections of nodeSelector and tolerations are used so that rtcd to be deployed in specific nodes.

After having the values above, to deploy the rtcd helm chart run:

As an example, a single call with 10 participants of which two are unmuted (transmitting voice data) will generally consume double the resources than the same call with a single participant unmuted. What ultimately counts towards performance is the overall number of concurrent media flows (in/out) across the server.

Here are some results from internally conducted performance tests on a dedicated instance:

For Enterprise customers we offer a way to offload performance costs through a dedicated service that can be used to further scale up calls.

We provide a load-test tool that can be used to simulate and measure the performance impact of calls.

Both the plugin and the external rtcd service expose some Prometheus metrics to monitor performance. You can refer to Performance monitoring for information on how to set up Prometheus and visualize metrics through Grafana.

Metrics for Calls plugin are exposed through the public /plugins/com.mattermost.calls/metrics API endpoint.

Metrics for rtcd service are exposed through the /metrics API endpoint.

If you wish to host many calls or calls with a large number of participants, take a look at the following platform specific (Linux) tunings (this is the only officially supported target for the plugin right now):

Is using UDP a requirement?

Yes, UDP is the recommended protocol to serve real-time media as it allows for the lowest latency between peers. While theoretically possible to use TCP, it’s not currently supported by the plugin. If using a UDP port is unfeasible, one possible solution would be to run calls through an external TURN server that listens on TCP and relays all media traffic between peers. However, this is a sub-optimal solution that should be avoided if possible as it will introduce extra latency along with added infrastructural cost.

Do I need a TURN server?

TURN becomes necessary when you expect to have clients that are unable to connect through the configured UDP port. This can happen due to very restrictive firewalls that either block non standard ports even in the outgoing direction or don’t allow the use of the UDP protocol altogether (e.g. some corporate firewalls). In such cases TURN is needed to allow connectivity.

We officially support and recommend using coturn for a stable and performance TURN service implementation.

How will this work with an existing reverse proxy sitting in front of Mattermost?

Generally clients should connect directly to either Mattermost or, if deployed, the dedicated rtcd service through the configured UDP port . However, it’s also possible to route the traffic through an existing load balancer as long as this has support for routing the UDP protocol (e.g. nginx). Of course this will require additional configuration and potential changes to how the plugin is run as it won’t be possible to load balance the UDP flow across multiple instances like it happens for HTTP.

Do calls require a dedicated server to work or can they run alongside Mattermost?

The plugin can function in different modes. By default calls are handled completely by the plugin which runs as part of Mattermost. It’s also possible to use a dedicated service to offload the computational and bandwidth costs and scale further (Enterprise only).

Can the traffic between Mattermost and rtcd be kept internal or should it be opened to the public?

When possible, it’s recommended to keep communication between the Mattermost cluster and the dedicated rtcd service under the same private network as this can greatly simplify deployment and security. There’s no requirement to expose rtcd’s HTTP API to the public internet.