Available on all plans

What is an Extended Support Release?

What is the life cycle of an Extended Support Release?

Mattermost provides an ESR when a significant number of new features and improvements have been added to the product, and have had sufficient time to stabilize. A new ESR is released twice a year, every January and July release. An ESR is supported for nine months to provide customers with enough time to test and upgrade to the next ESR.

When an ESR is at the end of its life cycle, there will be announcements ahead of time to provide time for people to test, certify, and deploy a newer ESR version before support ends. There will be a clear upgrade path provided between ESR versions. After a release reaches its end-of-life, no further updates will be provided for that version. Please see Release Lifecycle documentation for a full list of lifecycles for each Mattermost release. 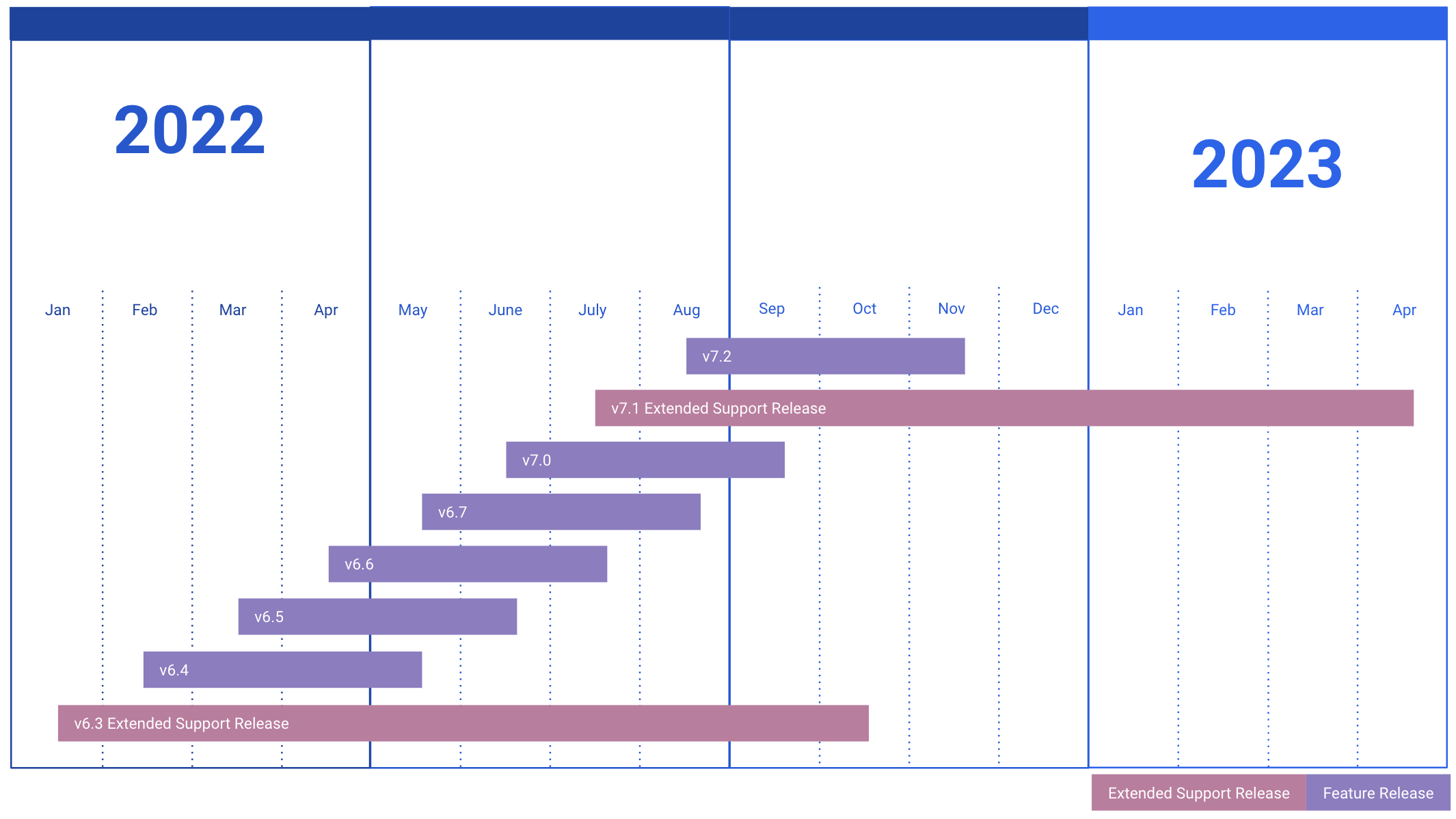 What is included in an Extended Support Release dot release?

Dot releases for ESR versions will contain high severity or high impact security fixes and bug fixes. They will not include changes to product functionality or new features.

Who should use an Extended Support Release?

ESRs are intended for organizations who value stability over having the newest features and improvements, or who have a long internal testing and certification process to undergo when upgrading.

If your organization prefers to have the newest features and improvements, Extended Support Releases may not be the best fit for you.

How do I install the Extended Support Release?

Follow our normal install or upgrade guides. Please follow the important upgrade notes for all the versions since the current ESR version you have currently installed. Please also see the changelog for list of database, API and config.json updates for each release.

When downloading the Mattermost version, choose an Extended Support Release from the list below.

What are the current supported Extended Support Release versions?

How do I restore a previous Extended Support Release?

Before you perform an upgrade, please ensure you have done a full back up of your current version. You can restore the database and previous version if you need to revert an upgrade. Please note that previous ESR versions are subject to an end of support date.

Why is an Extended Support Release supported for nine months and not longer?

We chose nine months because the overhead for maintaining an ESR is high (and becomes higher the longer the support window is). If we increase the support window, it decreases how much we can develop the product. We specifically chose “ESR” instead of “LTS”, since it is not intended to be a multi-year long term support release. The nine months support timeframe will not be extended in any case.

Can customers pay for extended support?

How do we notify customers about new and deprecated Extended Support Releases?

For a new upcoming ESR, we send out an email announcement on or close to release day. We also add a reminder on our release announcement, changelog, and via a Forum post (see example).

For a deprecated ESR, we send out an email announcement three months in advance. We also add reminders on our release announcements, changelogs, important upgrade notes, and our Forum site.

If we upgrade Mobile or Desktop Apps before we upgrade to the latest ESR, will we have compatibility issues?

Mattermost Desktop and Mobile Apps must be used with the latest Extended Support Release or a newer version of Mattermost Server.

What Mobile and Desktop App versions are compatible with the latest ESR?

Earlier 4.x versions of Mattermost Desktop App and earlier v1.x versions of the Mobile App are backwards compatible and are supported with our supported Extended Support Releases. However, for an optimal user experience and for latest security fixes, we strongly recommend upgrading both your Mattermost Desktop and Mobile Apps to the latest version.

Please review the Desktop App changelog and the Mobile App changelog notes for any self-hosted version requirements for features and functionalities, as well as notes on security fixes.

The latest version of the mobile app released in September (v1.55.1) is our first mobile extended support release. We are very excited about the upcoming general availability of the v2.0 mobile app in December. We recognize that some customers may have a custom build of Mattermost mobile and need more time to test or implement their custom changes on mobile v2.0. The mobile ESR will be supported until July 2023.

The mobile v1.55.1 (ESR) will be smoke tested monthly with every new server release until the mobile ESR reaches end-of-life (July 2023). The ESR version will receive critical security fixes only and be released as needed via unsigned builds to our mobile Github repository.